Now that the regular season is over I wanted to analyze the strength of schedule. I looked at the following computer rankings: Congrove, Colley, Sagarin, Bililngsley's, and Anderson and took the average ranking from them for each team. I was also interested in what our opponents' rankings were both at the time that we played them and at the end of the season. I do think that the ranking at the time you play an opponent is important because teams go through ups and downs and injuries so it helps to tell the story how where that team was at during that week of the season. Some of the computer rankings did not have rankings from previous weeks so the game day rank has less rankings making up the average. So here it is, enjoy. 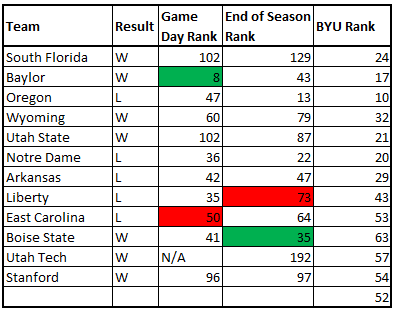